Lessons from Denmark about Inequality and Social Mobility

"We have underestimated how important our family background is" Berlingske (DK). March 16, 2021. Bent Winther

Many American policy analysts point to Denmark as a model welfare state with low levels of income inequality and high levels of income mobility across generations. It has in place many social policies now advocated for adoption in the U.S. Despite generous Danish social policies, family influence on important child outcomes in Denmark is about as strong as it is in the United States. More advantaged families are better able to access, utilize, and influence universally available programs. Purposive sorting by levels of family advantage create neighborhood effects. Powerful forces not easily mitigated by Danish-style welfare state programs operate in both countries.

"Treatment effects and the measurement of skills in a prototypical home visiting programme" VoxEU. August 21, 2020.

This paper evaluates the causal impacts of an early childhood home visiting program for which treatment is randomly assigned. We estimate multivariate latent skill profiles for individual children and compare treatments and controls. We identify average treatment effects of skills on performance in a variety of tasks. The program substantially improves child language and cognitive, fine motor, and social-emotional skills development. Impacts are especially strong in the most disadvantaged communities. We go beyond reporting treatment effects as unweighted sums of item scores. Instead, we examine how the program affects the latent skills generating item scores and how the program affects the mapping between skills and item scores. We find that enhancements in latent skills explain at least 90% of conventional unweighted treatment effects on language and cognitive tasks. The program enhances some components of the function mapping latent skills into item scores. This can be interpreted as a measure of enhanced productivity in using given bundles of skills to perform tasks. This source explains at most 10% of the average estimated treatment effects.

"The benefits of pre-schooling may extend for generations" The Economist. June 11, 2019.

"This is how quality early education can cross generations" World Economic Forum. May 29, 2019.

"The benefits of quality preschool for poor kids may extend to their children" Quartz. May 16, 2019. Annabelle Timsit.

"How Preschool May Benefit Generations Of Families" WBEZ. May 16, 2019. Nereida Moreno.

"Sending your boy to preschool is great for your grandson, new research shows" The Hechinger Report. May 14, 2019. Lillian Monegeau. 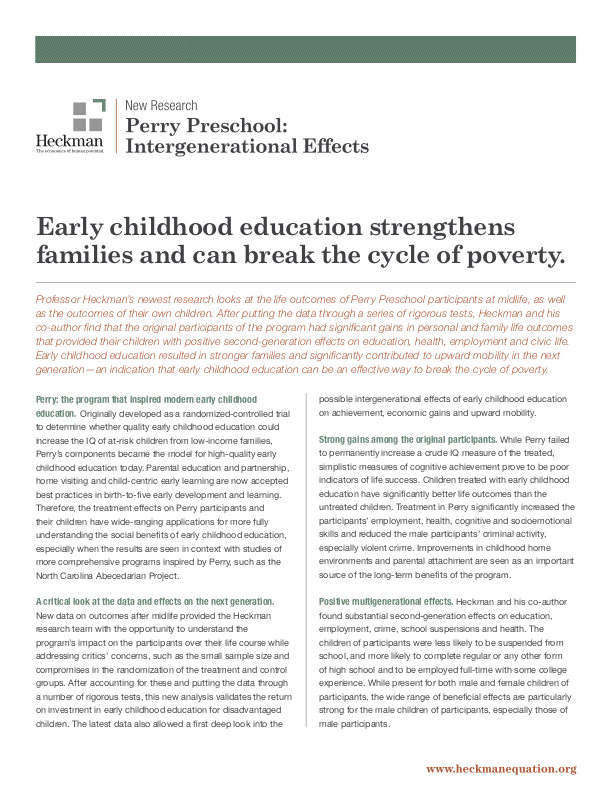 The Perry Preschoolers at Late Midlife: A Study in Design-Specific Inference

This paper presents the first analysis of the life course outcomes through late midlife (around age 55) for the participants of the iconic Perry Preschool Project, an experimental high-quality preschool program for disadvantaged African-American children in the 1960s. We discuss the design of the experiment, compromises in and adjustments to the randomization protocol, and the extent of knowledge about departures from the initial random assignment. We account for these factors in developing conservative small-sample hypothesis tests that use approximate worst-case (least favorable) randomization null distributions. We examine how our new methods compare with standard inferential methods, which ignore essential features of the experimental setup. Widely used procedures produce misleading inferences about treatment effects. Our design-specific inferential approach can be applied to analyze a variety of compromised social and economic experiments, including those using re-randomization designs. Despite the conservative nature of our statistical tests, we find long-term treatment effects on crime, employment, health, cognitive and non-cognitive skills, and other outcomes of the Perry participants. Treatment effects are especially strong for males. Improvements in childhood home environments and parental attachment appear to be an important source of the long-term benefits of the program.

Intergenerational Effects of Early-Life Advantage: Lessons from a Primate Study

"Economists care about where they publish—to the cost of the profession" The Economist. October 06, 2018.

"How Much Does Publishing in Top Journals Boost Tenure Prospects? In Economics, a Lot" The Chronicle of Higher Education. October 1, 2018. A. Williams June.

This paper examines the relationship between placement of publications in Top Five (T5) journals and receipt of tenure in academic economics departments. Analyzing the job histories of tenure-track economists hired by the top 35 U.S. economics departments, we find that T5 publications have a powerful influence on tenure decisions and rates of transition to tenure. A survey of the perceptions of young economists supports the formal statistical analysis. Pursuit of T5 publications has become the obsession of the next generation of economists. However, the T5 screen is far from reliable. A substantial share of influential publications appears in non-T5 outlets. Reliance on the T5 to screen talent incentivizes careerism over creativity. 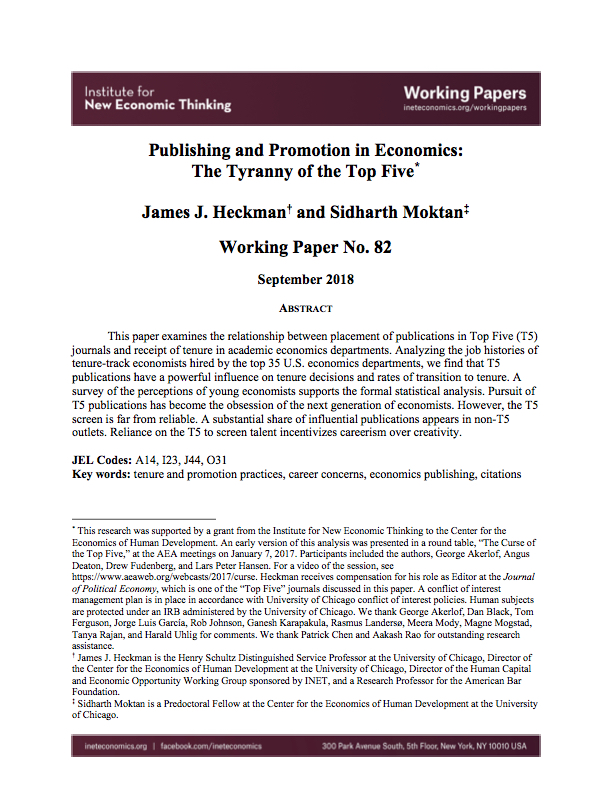 Quantifying the Life-cycle Benefits of an Influential Early Childhood Program

"The most important year in a child’s life? Research points to preschool" WTOP. September 21, 2017. Rachel Nania.

"Why your children’s day care may determine how wealthy they become" The Washington Post. April 24, 2017. Danielle Paquette.

"Public Preschool Education That Starts at Birth Would Be Better for the Economy, According to New Research" New York Magazine. December 12, 2016. Lisa Ryan.

This paper quantifies and aggregates the multiple lifetime benefits of an influential high-quality early childhood program with outcomes measured through midlife. Guided by economic theory, we supplement experimental data with non-experimental data to forecast the life-cycle benefits and costs of the program. Our point estimate of the internal rate of return is 13.7% with an associated benefit/cost ratio of 7.3. We account for model estimation and forecasting error and present estimates from extensive sensitivity analyses. This paper is a template for synthesizing experimental and non-experimental data using economic theory to estimate the long-run life-cycle benefits of social programs. 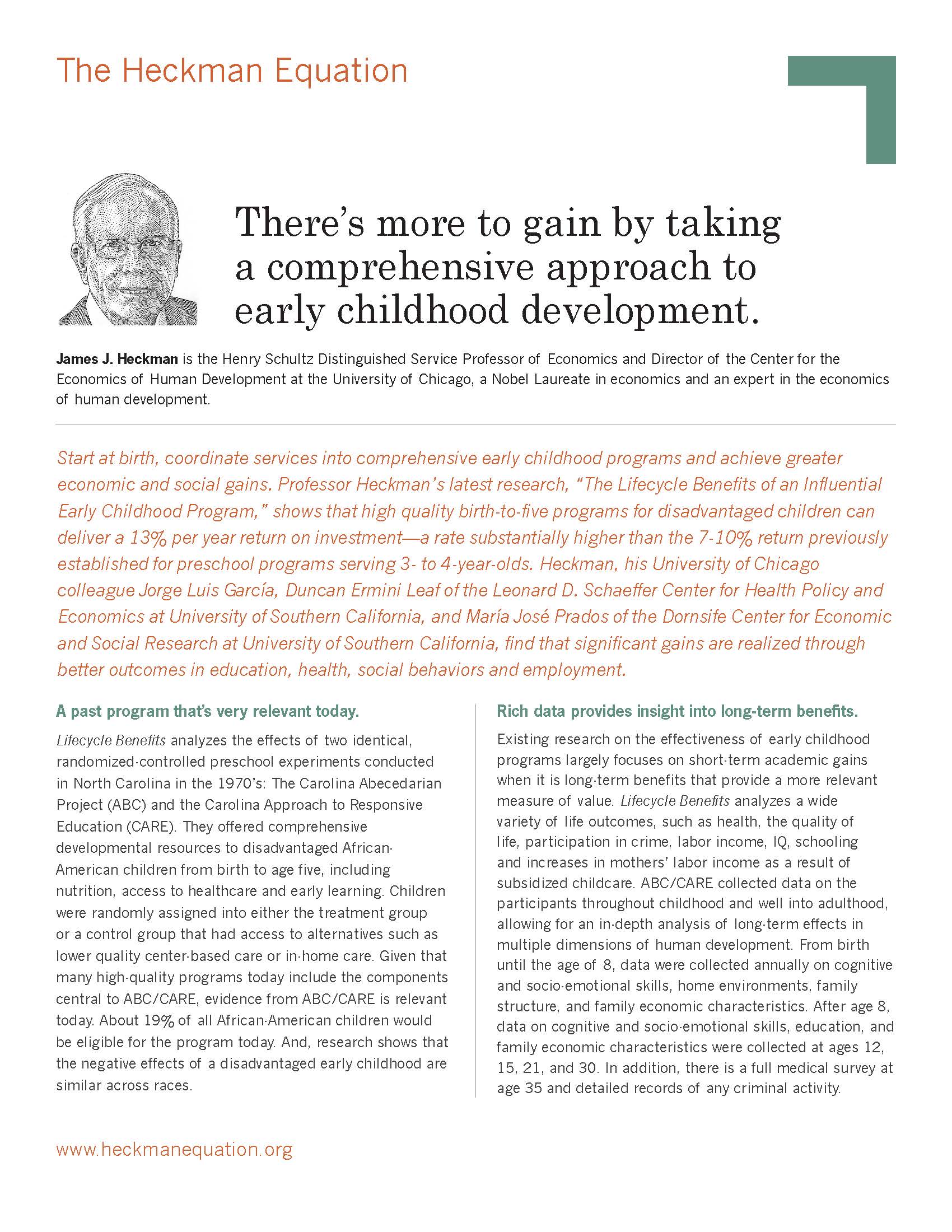 An Analysis of the Memphis Nurse-Family Partnership Program

"If Congress can't agree on kids' health, then D.C. is more broken than we though" The Salt Lake Tribune. September 30, 2017. Robert Gehrke.

This paper evaluates a randomized controlled trial of the Nurse-Family Partnership (NFP) program conducted in Memphis, TN in 1990. NFP offers home visits conducted by nurses for disadvantaged first-time mothers during pregnancy and early childhood. We test NFP treatment effects using permutation-based inference that accounts for the NFP randomization protocol. Our methodology is valid for small samples and corrects for multiple-hypothesis testing. We also analyze the underlying mechanisms generating these treatment effects. We decompose NFP treatment effects into components associated with the intervention-enhanced parenting and early childhood skills. The NFP improves home investments, parenting attitudes and mental health for mothers of infants at age 2. At age 6, the NFP boosts cognitive skills for both genders and socio-emotional skills for females. These treatment effects are explained by program-induced improvements in maternal traits and early-life family investments. At age 12, the treatment effects for males (but not for females) persist in the form of enhanced achievement test scores. Treatment effects are largely explained by enhanced cognitive skills at age 6. Our evidence of pronounced gender differences in response to early childhood interventions contributes to a growing literature on this topic. 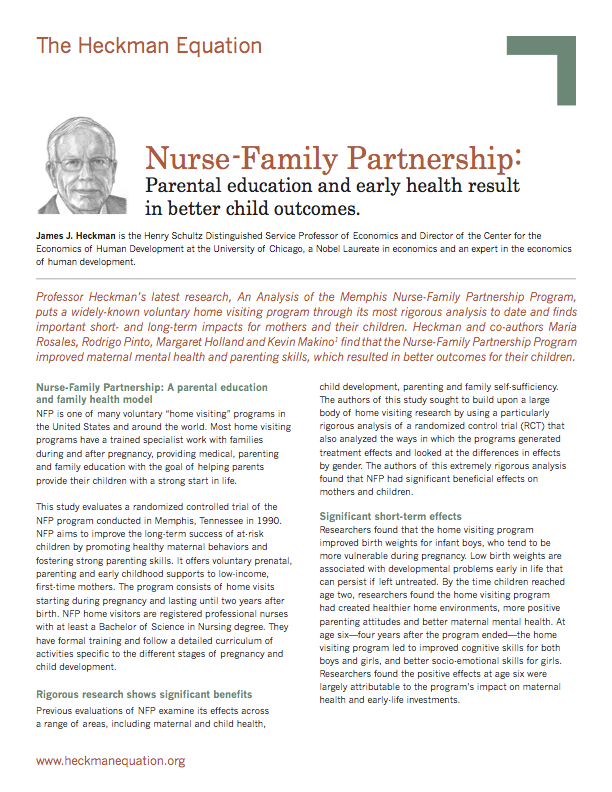 Gender Differences in the Benefits of an Influential Early Childhood Program

"Why Expanding Access to Childcare Isn't Enough" The Atlantic. May 25, 2017. Hayley Glatter.

This paper studies the life-cycle impacts of a widely-emulated high-quality, intensive early childhood program with long-term follow up. The program starts early in life (at 8 weeks of age) and is evaluated by an RCT. There are multiple treatment effects which we summarize through interpretable aggregates. Girls have a greater number of statistically significant treatment effects than boys and effect sizes for them are generally bigger. The source of this difference is worse home environments for girls with greater scope for improvement by the program. Fathers of sons support their families more than fathers of daughters. 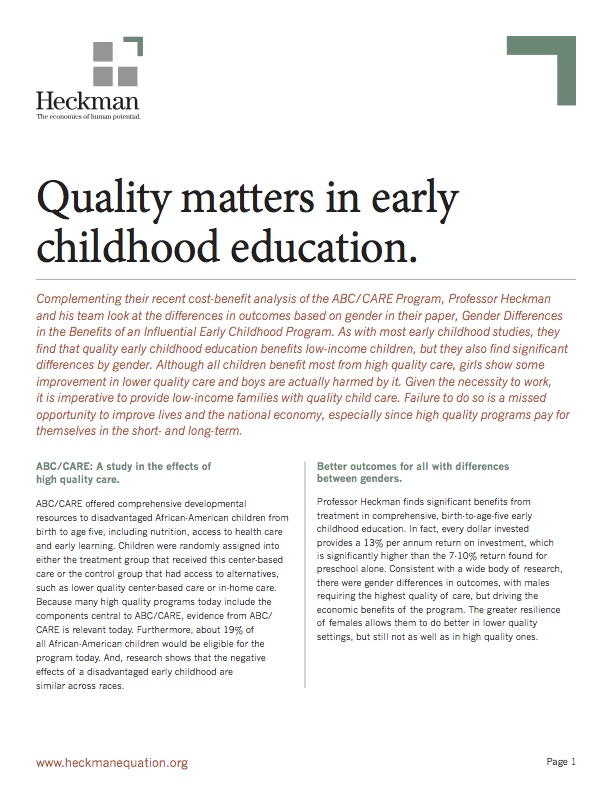 Quantifying the Life-cycle Benefits of an Influential Early Childhood Program

This paper quantifies and aggregates the multiple lifetime benefits of an influential high- quality early childhood program with outcomes measured through midlife. Guided by economic theory, we supplement experimental data with non-experimental data to forecast the life-cycle benefits and costs of the program. Our point estimate of the internal rate of return is 13.7% with an associated benefit/cost ratio of 7.3. We account for model estimation and forecasting error and present estimates from extensive sensitivity analyses. This paper is a template for synthesizing experimental and non- experimental data using economic theory to estimate the long-run life-cycle benefits of social programs.

The Scandinavian Fantasy: The Sources of Intergenerational Mobility in Denmark and the U.S.

by Rasmus Landersø (The Rockwool Foundation) and James J. Heckman

This paper examines the sources of differences in social mobility between the U.S. and Denmark. Measured by income mobility, Denmark is a more mobile society, but not when measured by educational mobility. There are pronounced nonlinearities in income and educational mobility in both countries. Greater Danish income mobility is largely a consequence of redistributional tax, transfer, and wage compression policies. While Danish social policies for children produce more favorable cognitive test scores for disadvantaged children, these do not translate into more favorable educational outcomes, partly because of disincentives to acquire education arising from the redistributional policies that increase income mobility.

"The Scandinavian fantasy: The sources of intergenerational mobility in Denmark and the US." Vox EU. September 12, 2016. Rasmus Landersø, James Heckman.

"This country has figured out the only way to save the American Dream." The Washington Post. August 3, 2016. Matt O'Brien.

This paper organizes and synthesizes the literature on early childhood education and childcare. In it, we go beyond meta-analysis and reanalyze primary data sources in a common framework. We consider the evidence from means-tested demonstration programs, large-scale means-tested programs and universal programs without means testing. We discuss which programs are effective and whether, and for which populations, these programs should be subsidized by governments. The evidence from high-quality demonstration programs targeted toward disadvantaged children shows beneficial effects. Returns exceed costs, even accounting for the deadweight loss of collecting taxes. When proper policy counterfactuals are constructed, Head Start has beneficial effects on disadvantaged children compared to home alternatives. Universal programs benefit disadvantaged children.

This paper investigates the determinants of inequality in human capital with an emphasis on the role of the credit constraints. We develop and estimate a model in which individuals face uninsured human capital risks and invest in education, acquire work experience, accumulate assets and smooth consumption. Agents can borrow from the private lending market and from government student loan programs. The private market credit limit is explicitly derived by extending the natural borrowing limit of Aiyagari (1994) to incorporate endogenous labor supply, human capital accumulation, psychic costs of working, and age. We quantify the effects of cognitive ability, noncognitive ability, parental education, and parental wealth on educational attainment, wages, and consumption. We conduct counterfactual experiments with respect to tuition subsidies and enhanced student loan limits and evaluate their effects on educational attainment and inequality. We compare the performance of our model with an influential ad hoc model in the literature with education-specific fixed loan limits. We find evidence of substantial life cycle credit constraints that affect human capital accumulation and inequality. The constrained fall into two groups: those who are permanently poor over their lifetimes and a group of well-endowed individuals with rising high levels of acquired skills who are constrained early in their life cycles. Equalizing cognitive and noncognitive ability has dramatic effects on inequality. Equalizing parental backgrounds has much weaker effects. Tuition costs have weak effects on inequality.

The Non-Market Benefits of Education and Ability

This paper analyzes the non-market benefits of education and ability. Using a dynamic model of educational choice we estimate returns to education that account for selection bias and sorting on gains. We investigate a range of non-market outcomes including incarceration, mental health, voter participation, trust, and participation in welfare. We find distinct patterns of returns that depend on the levels of schooling and ability. Unlike the monetary benefits of education, the benefits to education for many non-market outcomes are greater for low-ability persons. College graduation decreases welfare use, lowers depression, and raises self-esteem more for less-able individuals.